here is an article of great interest.
i always love learning how a meek little plant or being
can have such a great big good effect in balancing out
mankind's greed and stupidity.
rock on creation!
xo
snowdrop 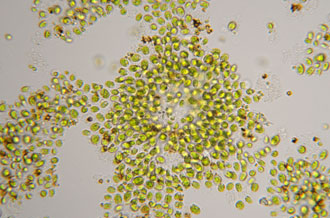 A study shows that chlorella, a single-celled organism that has been used for many years as a nutritional supplement, can help flush methylmercury from your system.

Methylmercury is a neurotoxic compound widely used in industrial applications. It accumulates in fish, which has led to widespread advisories against fish consumption by pregnant women.

The study in the Journal of Toxicological Sciences reports:

"These results suggest that the intake of [chlorella] may induce the excretion of Hg [mercury] both in feces and urine ... The effect of [chlorella] on the tissue mercury accumulation may become evident in a long-term experiment."

Chlorella, a single-celled fresh water algae, is often referred to as a near-perfect food, as its range of health benefits are truly astounding.

Chlorella acts as an efficient detoxification agent by binding to toxins, such as mercury, in your body and carrying them out of your system. It is the chlorophyll in chlorella that makes it so powerful, as chlorophyll helps you process more oxygen, cleanses your blood and promotes the growth and repair of your tissues.

Arguably, the most important property of chlorella is its ability to help rid your body of heavy metal toxins -- an increasingly ubiquitous source of pollution in the environment -- but I even recently included it as one of the top seven foods to slow aging.

Are Heavy Metals Contaminating Your Body?

If you've received a vaccine, had or have silver (mercury) fillings in your mouth, or eaten fish, it's highly likely you have some level of mercury poisoning that may be compromising your health.

Heavy metal toxicity, just like chemical toxicity, has become one of the most pressing health hazards of our day. Your body is assailed by chemicals and heavy metals on a daily basis, oftentimes from the most innocent-looking sources, from your everyday cookware to your dental fillings and tilapia dinner filet.

One of the major routes of exposure to heavy metals in the United States, aside from vaccines and dental fillings, is eating fish.

For the most part mercury in the fish and the environment is related to the fact that the majority of electricity is generated from burning coal, which releases the mercury into the air and then into the waterways once it rains. There certainly are other industrial sources in some areas but this is the primary source.

Mercury is released from the smokestacks of coal-fired power plants, cement kilns and certain types of mining activities. Once in the air, the toxic mercury rains down into bodies of water. From there it is converted by bacteria into a particularly dangerous form called methylmercury, where it finds its way into fish, accumulating especially in fish that are higher up the food chain.

The larger the fish, the likelier they are to have high levels of this toxin. The National Resources Defense Council points out, for instance, that predatory fish such as large tuna, swordfish, shark and mackerel can have mercury concentrations in their bodies that are 10,000 times higher than those of their surrounding environment!

Dental amalgam fillings are also made from about 50 percent mercury and the rest an amalgam of silver, tin, copper, zinc and other metals. It's an ironic fact that the metallic mercury used by dentists to manufacture dental amalgam is shipped as a hazardous material to the dental office. Any amalgam leftover is also treated as hazardous and requires special precautions to dispose of.

Yet you can have those same toxic fillings put into your mouth just by asking (and paying the price, of course)!

These metals build up in your body over time, leading to chronic symptoms that you may never equate with your love for sushi or the dental filling you got five years ago.

Symptoms of toxic build-up due to chronic metal exposure include:

Mercury is also a potent toxin in its own right that can damage your brain, central nervous system and kidneys, and is especially dangerous for children, fetuses, pregnant and nursing women and people who have high levels of mercury bioburden.

It makes sense for virtually everyone to takes steps to proactively remove metals from their body before they are plagued by symptoms, and if you have any of the symptoms above ridding your body of metals may help them resolve.

Getting back to chlorella, this algae is one of the most potent ways to help detoxify your body of mercury and other metals. As this latest study showed, chlorella effectively induced the excretion of mercury in both urine and feces in mice fed the metal.

This is important, as chlorella plays a particularly crucial role in systemic mercury elimination because the majority of mercury is rid through your stool. Once the mercury burden is lowered from your intestines, mercury from other body tissues will more readily migrate into your intestines -- where chlorella will work to remove it.

One can also use cilantro as a synergetic detoxification aid with the chlorella.
, toxic
Chlorella's cleansing action on your bowel and other elimination channels, as well as its protection of your liver, also helps promote clean blood. And clean blood helps assure metabolic waste get efficiently carried away from your tissues.

Again, chlorella is such a powerful detoxifier because it is rich in chlorophyll, which is known to:

* Aid you in processing more oxygen
* Cleanse key elimination systems like your bowel, liver, and blood
* Help purify your blood and clean away toxins
* Aid you in promoting optimal blood pressure
* Support elimination of molds in your body
* Help neutralize bad air you might breathe in
* Promote growth and repair of your tissues

Chlorella is actually useful even beyond detoxification, and its range of health benefits includes:

* Boosting your immune system
* Improving your digestion, especially if constipation is a problem
* Enhancing your ability to focus and concentrate
* Increasing your energy levels
* Balancing your body's pH
* Normalizing your blood sugar and blood pressure
* Reducing your cancer risk
* Freshening your breath

As with any supplement, different brands of chlorella will vary widely with regard to overall quality, potency and purity, so make sure you purchase from a reputable source.
Posted by snowdrop at 3:23 PM